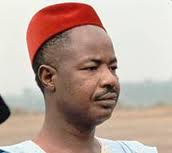 Cameroon’s first ever president, Ahmadou Ahidjo, served from 1960 to 1982 and passed away seven years later. He presided over one of the few successful attempts at supraterritorial African unity: the joining of the southern half of the former British Cameroons with the larger, French-speaking Cameroon.

Born August 1924, Ahidjo was a Muslim from the northern part of Cameroon and served as a radio operator in the French colonial administration from 1941/42 to 1953. He was elected to the Cameroon territorial assembly in 1947 and re-elected in 1952 and 1956. His early political career also included several years in France (1953–56) as the Cameroon member of the Assembly of the French Union.

In the first Cameroon government (1957), he was vice premier and minister of the interior; when the first premier fell in early 1958, he formed his own party, the Cameroonian Union, and became the new premier.

Since 1956 the more radical, nationalist Union of the Populations of Cameroon, which advocated immediate independence from France, had taken up arms against the French administration. Ahidjo used French troops to put down the rebels, but he also offered amnesty to those who would surrender. Many refused, however, and sporadic outbreaks of violence haunted Ahidjo for years.

After being elected five consecutive times for the presidency (in what became a one-party state), he resigned on Nov. 6, 1982, claiming that he was suffering from exhaustion. He was replaced by a Christian southerner, Paul Biya, who proceeded to oust Ahidjo from chairmanship of the ruling party in 1983.

After 1983 Ahidjo lived in exile, and in 1984 he was, in absentia, condemned to death in Cameroon for complicity in a plot against Biya. He never returned to Cameroon, dividing his time between residences in Senegal and the south of France.