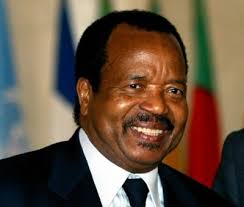 Currently the longest ruling Non-Royal head of state in the world, Cameroons President, Paul Biya, has spent more than three decades in power. The octogenarian became president of the West African nation 32 years ago when his predecessor, Ahmadou Ahijo, resigned. Critics have often criticized Biya for failing to hand over power, democratically or otherwise.

Born as Paul Barthélemy Biya'a bi Mvondo, in Febrauar1933, a native of Cameroon's south, Biya rose rapidly as a bureaucrat under President Ahmadou Ahidjo in the 1960s, serving as Secretary-General of the Presidency from 1968 to 1975 and then as Prime Minister of Cameroon from 1975 to 1982.

Biya introduced political reforms within the context of a single-party system in the 1980s. Under pressure, he accepted the introduction of multiparty politics in the early 1990s. He narrowly won the 1992 presidential election with 40 per cent of the plural, single-ballot vote and was re-elected by large margins in 1997, 2004, and 2011. Opposition politicians and Western governments have alleged voting irregularities and fraud on each of these occasions. A two-term limit in the 1996 constitution should have prevented him from running again, but in 2008 he revised the constitution to eliminate presidential term limits.

Biya is serving the third year in his current seven-year term. Many in Cameroon suspect that if his health holds up, he will likely run again for president in 2018.